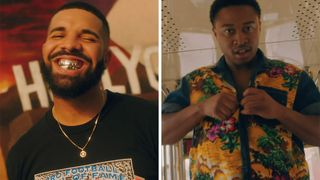 [Update] August 2, 2018, 9:47 p.m.: Drake has released the official music video for “In My Feelings” starring the song’s viral superstar Shiggy.

You can watch the video above and read our original story below.

Drake took to Instagram Stories on Wednesday night to tease the drop of the official video for “In My Feelings,” which should be released at some point today. His post included two photos of Clair Huxtable from The Cosby Show, although there’s no word on how they might relate to the music video.

Shooting began in early July, when Champagne Papi was spotted in New Orleans, Louisiana with Karena Evans, the director behind “God’s Plan,” “Nice for What,” and “I’m Upset.” The location was picked as “In My Feelings” features a sample from New Orleans artist, Magnolia Shorty, and her track “Smoking Gun.”

It might feel like “In My Feelings” has been around for ages already, thanks to the dance challenge that has helped the track dominate the charts. It’s unclear if Shiggy — who started the craze — will cameo in the video, but we do know that Big Freedia will be making an appearance.

What do you want to see in the video? Let us know in the comments.

Next, how did Travis Scott become of music’s most divisive artists?