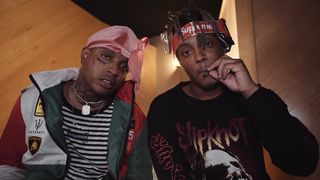 The two stars touch base on a variety of topics, kicking it off with their belief on the laws of attraction, to sharing their favorite anime, cartoons and video games. Ski Mask also delves in to the realest bars that he ever wrote, which was the 2015 single “Freddy VS Jason” featuring the late XXXTENTACION.

Juice WRLD then talks about what the concept of “the abyss” is, calling it somewhere “everybody is trapped in. Here’s the perfect example of some abyss sh*t. A person goes to a D1 college, they spend all this money to get a degree, they don’t even do the sh*t they got the degree for, and they work in an office every day until they die. He or she is in the abyss.”

Juice then talks about what Drake means to the culture, saying “I was listening to ‘Thank Me Later’ the other day, I related to most of the sh*t he was talking about. Drake has a lot to do with the culture. The rap game an abyss and Drake is the gatekeeper.”

Additionally, the rappers close it out by explaining the remedy for a broken heart and the meaning of love, as well as their message to the youth. Enjoy the full interview in the video above.

In other music news, a second suspect has been arrested in the murder of XXXTentacion.

Here’s Your First Look at ‘The Simpsons’ x Vans Collection
SneakerssponsoredAugust 3, 2020
We Recommend