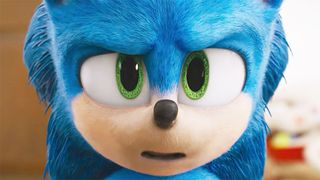 Paramount Pictures has just dropped the official trailer for its upcoming Sonic The Hedgehog movie and, you’ll be happy to hear, there’s not a creepy human tooth in sight. Watch above.

The movie has been under a huge overhaul since the first trailer released earlier this year, teasing the arrival of a new Sonic that threatened to destroy everyone’s childhood memories of the speedy critter. Due to the backlash, director Jeff Fowler promised to delay the movie and head back to the drawing board.

The result of that overhaul you can watch above. In terms of narrative, Sonic The Hedgehog follows the SEGA characters — voiced by Ben Schwartz (Parks and Recreation) — and his best friend Tom (James Marsden, Westworld) as they attempt to stop arch nemesis Dr. Robotnik (Jim Carey) from taking over the world.

Humans Are Hunted for Sport in New Blumhouse Thriller ‘The Hunt’
MoviessponsoredJuly 30, 2019