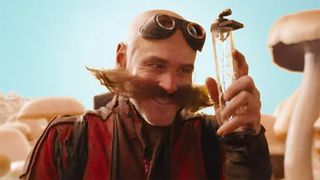 Earlier today Paramount Pictures dropped the first trailer for its new Sonic the Hedgehog live-action film. Shortly after the premiere, social media was booming with reactions to the nearly-three-minute clip, and let’s just say they weren’t overwhelmingly positive.

Paramount’s Sonic the Hedgehog finds Parks and Recreation‘s Ben Schwartz voicing the titular character, while James Marsden portrays his human sidekick, Tom Wachowski. In the film Sonic is called on to save Earth from the villainous Dr. Robotnik (played by Jim Carrey), who is trying to harness Sonic’s powers for world domination. Tika Sumpter, Neal McDonough, and Adam Pally also feature in the picture, which is based on SEGA’s hit video game franchise.

Directed by Jeff Fowler, Sonic the Hedgehog is due in theaters this November.

Below you will find some our favorite reactions to the first official Sonic the Hedgehog trailer. Most fans insist that the film’s only saving grace could be Jim Carrey’s Dr. Robotnik. After peeping the social media comments, let us know what you think about the movie.

How many people are gonna watch this movie pic.twitter.com/zRqS8dBfvm

This is hell
This is what hell is

NOTHING in this trailer fits at all with anything we know about Sonic.

Doing an origin story for robotnik is fine, but hopefully they at least explain how sonic ended up on Earth…. pic.twitter.com/inXlQrThxr

I'm not asking for any particular reason, but how much money was spent making this?

this sums up my reaction to that trailer pic.twitter.com/vfa5YuPpVO

The sonic i want vs the sonic mom says we have at home pic.twitter.com/iT9tBKh5Zu

The only thing that can save the Sonic movie is a large amount of full penetrative sex scenes. Give the Sonic fans what they want

Despite how fucking ghastly Sonic looks in the movie I do think Jim Carrey is going to nail the part of Robotnik from the looks of things. He's channeling 90's era Jim Carrey which is best Jim Carrey as we all know. pic.twitter.com/sOOq2CwKbw

Good morning to absolutely everyone and everything other than live action Sonic the Hedgehog’s creepy human teeth xx pic.twitter.com/yJX6WPW7Li

Me when i clicked 'Jim Carrey' on trending pic.twitter.com/2VJhrQZv9n

If nothing else, the #SonicTheHedgehog trailer is serving us some strong Jim Carrey looks 👀 pic.twitter.com/8BfXQZmXTZ

If anything Jim Carrey is the best thing about the new Sonic movie pic.twitter.com/ub44CM3cNq

WHAT I TELL YALL!
JIM CARREY GONNA CARRY THE SONIC MOVIE ON HIS BACK AND NONE OF YALL CAN TELL ME OTHERWISE pic.twitter.com/3E9yjaQCvc