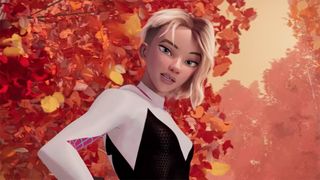 Ahead of next week’s premiere, Sony Pictures shares yet another trailer for the anticipated Spider-Man: Into the Spider-Verse. Our last look highlighted Peter Parker teaching Miles Morales how to swing, whereas this particular clip introduces Spider-Gwen.

Spider-Gwen/Gwen Stacy is voiced by Hailee Steinfeld, as the new teaser informs us how she ended up being stuck in another dimension. Peter Parker’s Spider-Man is also featured in the visual, in addition to Miles Morales’ Spider-Man.

Spider-Man: Into the Spider-Verse comes from Phil Lord and Christopher Miller, the creative minds behind The Lego Movie and 21 Jump Street. The film ultimately introduces Brooklyn teen Miles Morales as he joins an array of Spider-People.

Up next, watch the first trailer for ‘Avengers 4,’ officially titled ‘Avengers: Endgame.’

Sony Gives Its Anticipated ‘Spider-Man: Into the Spider-Verse’ Sequel a 2022 Release Date
MoviessponsoredNovember 2, 2019

The Oscar-Winning ‘Spider-Man: Into the Spider-Verse’ Is Now on Netflix
MoviessponsoredJune 27, 2019