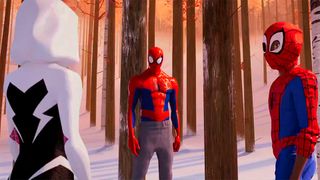 Peter Parker isn’t the only Spider-Man out there, as today we get a look at a new version of the superhero, courtesy of Miles Morales. From Phil Lord and Christopher Miller, the creative minds behind The LEGO Movie and 21 Jump Street, we’re presented with the first trailer for Spider-Man: Into the Spider-Verse.

The uniquely-animated film is set in “another universe, that looks and sounds like yours, but it’s not,” centering around the aforementioned Miles Morales, a Brooklyn teen, voiced by Shameik Moore. Growing into his role as Spider-Man, Morales is mentored by Peter Parker, who is voiced by Jake Johnson.

As the YouTube description points out, Spider-Man: Into the Spider-Verse introduces us to Morales and “the limitless possibilities of the Spider-Verse, where more than one can wear the mask.”

In other film news, ‘The LEGO Movie 2: The Second Part’ takes on ‘Mad Max’ in its first trailer.

Sony Gives Its Anticipated ‘Spider-Man: Into the Spider-Verse’ Sequel a 2022 Release Date
MoviessponsoredNovember 2, 2019

The Oscar-Winning ‘Spider-Man: Into the Spider-Verse’ Is Now on Netflix
MoviessponsoredJune 27, 2019