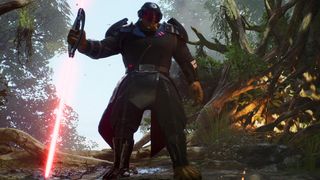 We’re a little more than two weeks away from Star Wars Jedi: Fallen Order releasing, and EA is getting our mouths watering with the official launch trailer. This spot is lighter on story and gets down to what we really care about most: the lightsabers.

Several clips feature in-game combat with the lightsaber, in duels and just absolutely wrecking and underarmed Scout Trooper. It also shows a few bosses, who look as formidable as in Dark Souls.

Prepare to take part in the journey of Cal Kestis after the dark times after Order 66 was executed on Xbox One, PlayStation 4 and PC November 15.