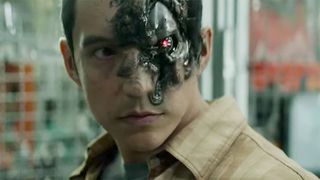 “I had this nice simple life and now it’s a nightmare.” So starts the first teaser trailer for the latest movie in the Terminator franchise, Dark Fate, which has just dropped courtesy of Paramount Pictures. Watch above.

The trailer showcases the return of Sarah Connor (Lina Hamilton) and the Terminator (Arnold Schwarzenegger), as well as a brand new Terminator, played by Gabriel Luna’s Terminator. The narrative follows on from the events of Terminator 2: Judgment Day.

Naturally, the two-and-a-half minute trailer is stacked with action sequences, huge explosions, fight scenes, and badass women trying to take down the Terminator.

Terminator: Dark Fate is slated to land in theaters nationwide this November.

On this episode of The Dropcast, DJ Amrit stops by, fresh off an international tour with Tommy Genesis. We talk about life on the road, how everyone wants to be a “multi-hyphenate creative,” and finessing your way into the club. Check below.