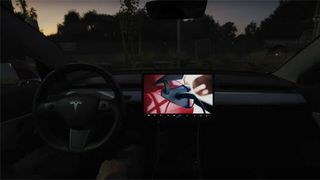 Elon Musk follows up his July promise to bring Netflix to Tesla with the rollout of software version 10.0. Officially titled Tesla Theater Mode, the update allows users to use Netflix, YouTube and Hulu/Hulu+ (including Live TV if you’re subscribed to that feature), while their car is in park. The mode also gives access to Tesla tutorial videos.

Further entertainment updates in the form of “Car-aoke,” a karaoke app for the car that comes with a massive library of music and song lyrics, with support for multiple languages, alongside run and gun game Cuphead.

One of the most requested features from all Tesla drivers, Spotify Premium, also makes its long-awaited debut in all supported markets.

Novelty updates include “Joe Mode,” which lowers the cabin volume for select alerts such as parking chimes, in addition to “I’m Feeling Lucky” and “I’m Feeling Hungry” navigation features, which will lead you to a local restaurant or point of interest that’s within your car’s range.

Additional updates in V10.0 include Smart Summon, which gives customers who purchased Full Self-Driving Capability or Enhanced Autopilot the ability to summon their car through a parking lot directly to where they are, as long as their car is within their line of sight.

Tesla owners around the world should expect software version 10.0 via an over-the-air update this week.

For the full release notes, head over to the Tesla blog.

The Dubai Police Force Wants to Add the Tesla Cybertruck to Its Fleet in 2020
DesignsponsoredNovember 30, 2019