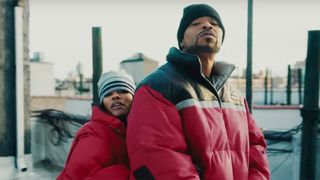 Teyana Taylor has tapped three members of Wu-Tang Clan — Ghostface Killah, Method Man and Raekwon — to feature on her official “Gonna Love Me Remix.” The Harlem entertainer introduces the revamped cut to the world via a self-directed music video.

Shot in New York, we find Teyana involved in an intense love triangle, as Ghostface Killah, Method Man and Raekwon all appear in the aesthetic. Press play above to check it out.

“Gonna Love Me” can be found on Taylor’s June 2018 release of K.T.S.E., her second studio album. After watching the remix’s video above, you can revisit the LP underneath.

Up next, see Cardi B rap “Bodak Yellow” with James Corden on a preview of ‘Carpool Karaoke.’

The Best Sneakers Out This Weekend & Where to Buy Them
SelectssponsoredSeptember 16, 2020

A Wu-Tang Clan Lullaby Album Is On the Way
MusicsponsoredMarch 6, 2020