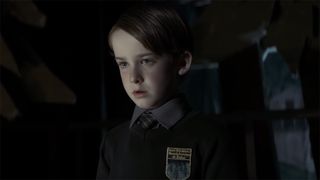 Ahead of the Sundance Film Festival, A24 shares the trailer for its new horror film, The Hole in the Ground.

The movie tells the story of a mother, Sarah, and her son, Chris, who move to a secluded home in a rural town, with hopes of a fresh start. After meeting their mysterious new neighbor, however, they quickly become overtaken with a sense of uneasiness.

One night, Chris decides to explore the forest behind their house, but when he doesn’t come back, Sarah goes searching for him, only to stumble upon a gaping sinkhole. Following the son’s return, he begins to display noticeably strange behavior, leading his mother to believe whoever came back is not her child.

Lee Cronin’s The Hole in the Ground stars Seána Kerslake, James Cosmo, Kati Outinen and James Quinn Markey, and is due out on DIRECTV January 31, followed by a limited theatrical run beginning March 1.

For more, here’s a guide to the big A24 movies coming out this year.

NYC Store Lichen Will Help You Flex Your Home As Much As Your ’Fits
DesignsponsoredAugust 12, 2019