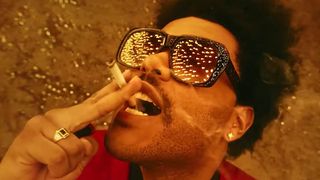 After a week of hype around his new track releases, The Weeknd has dropped the official video for the Metro Boomin-produced “Heartless.” The video serves as a four-minute-long, drug-fueled trip around Las Vegas. Watch above.

Directed by Anton Tammi, the clip shows the two artists spinning around Vegas casinos and the Heartless Hotel. It features a number of head-turning scenes including one Fear and Loathing-esque situation in which The Weeknd licks an actual frog.

“Heartless” and The Weeknd’s other new track “Blinding Lights,” which dropped in a new Mercedes Benz commercial last week, are expected to feature on his upcoming album. Specific details regarding that project, however, are yet to be announced.

Everything You Wanted to Know About Rolex (But Were Afraid to Ask)
StylesponsoredFebruary 27, 2020
We Recommend

The Weeknd Earns His Fourth Hot 100 No. 1 With “Heartless”
MusicsponsoredDecember 10, 2019
Follow
Highsnobiety Music
What To Read Next
Load More
Search Results
Load More