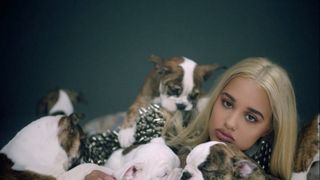 Tommy Genesis just dropped a cheeky visual for her latest single “100 Bad” like it’s no big deal, but rest assured it’s a gift that keeps on giving. The self-directed video starts off with the art rapper getting smothered by a litter of puppies. As things progress, she rolls over to a pile of hot pink tampons and hits viewers with that unbreakable gaze that could kill on command. From there, Genesis advances to touching herself with a stack of dollar bills and then finger painting on a glass wall. For the finale, she figuratively goes out with a bang by making it rain with a big bottle of champagne.

Genesis briefly outlined the concept for the video in a press release. “The ‘100 Bad’ music video turned out brighter than I expected,” she said. “For the chorus it was either puppies or girls, the tampon scene is sort of my DIY take on Kelis laying in candy—the cash scene is a direct reference to Tracey Emin’s ‘I Want It All.’ The outro is a champagne ejaculation and it’s supposed to make you uncomfortable-it’s a commentary on the male gaze.”

It’s safe to say that Genesis is not your typical video girl by any measure. Though she has yet to confirm when her debut album will be released, it’s definitely going to be worth the wait. Get a full glimpse of this powerful masterpiece above. Bottoms up, babes!

In other news, Rico Nasty teamed up with Yoshi Flower on his new single “Brown Paper Bag 2.0.” Get all the details right here.