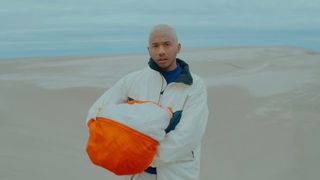 Chaz Bear aka Toro y Moi is a marooned pilot, stranded on an apparently uninhabited island in the newly released video for “50-50.” The Justin Morris and Colin Matsui-directed visual follows Bear as he traverses sand dunes, armed with nothing but a parachute and a bloody nose. The castaway becomes tormented by a masked figure, presumably his alter ego.

The Instupendo-assisted track closes out the Oakland artist’s Outer Peace album that dropped earlier this year on Carpark Records. After you watch the narrative unfold, revisit our in-depth profile on Bear here.

Up to 50% off
UncategorizedsponsoredFebruary 7, 2020
Follow
Highsnobiety Music
What To Read Next
Load More
Search Results
Load More