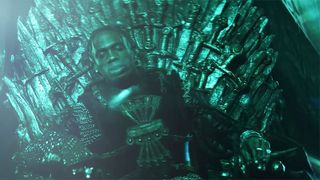 HBO has released a full-length video for The Weeknd, SZA, and Travis Scott‘s Game of Thrones collaborative track, “Power is Power.” Watch above.

The previously-teased video is full of show clips, from close-ups of the Night King and Jon Snow to the Battle of Winterfell and swooping dragons. The three artists also take it in turns to perform upon the Iron Throne and in themed locations like an ice-filled room, before fire, and atop the wall.

A ‘Game of Thrones’ Track by The Weeknd, Travis Scott & SZA Is Coming
MusicsponsoredApril 7, 2019

Listen to Leaked Travis Scott “Wonderful” Demo Track Before It Gets Taken Down
MusicsponsoredJune 11, 2019