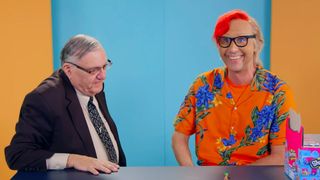 Sacha Baron Cohen is back with the latest — and most shocking — episode of his new Showtime comedy series, Who Is America?. For this particular installment, a disguised Cohen invites former Arizona Sheriff, Joe Arpaio, to the show.

Arpaio thinks he’s appearing on a YouTube broadcast by Finnish YouTuber OMGWhizzBoyOMG, real name: Ladislas Kekkonen, which of course is Cohen. The actor/comedian then somehow gets Arpaio to not only suggest that Trump might have had a golden shower, but also admit that he may allow the president to give him oral sex.

Arpaio, a close ally of Trump, is best known for illegally detaining Latinos and refusing to improve jail conditions while sheriff of Arizona’s Maricopa County for 24 years. Following a recent criminal conviction, Arpaio was pardoned by Trump last August.

After watching the surreal episode of Who Is America? above, see below for other installments.

Now, here are the most outrageous Sacha Baron Cohen moments.

This Epic Skate Video Takes You on a Road Trip Across America
SkateboardingsponsoredJanuary 2, 2020
Follow
Highsnobiety Life
What To Read Next
Load More
Search Results
Load More