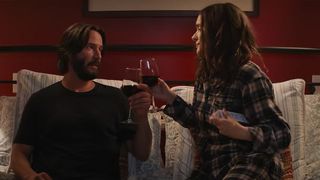 Director Francis Ford Coppola has corroborated the theory that Winona Ryder and Keanu Reeves might have tied the knot for real on the set of his 1992 movie, Bram Stoker’s Dracula. Ryder revealed the tasty tidbit in a conversation with EW this Saturday, which Coppola backed to The Guardian today.

While Reeves and Ryder were promoting their new movie Destination Wedding (whose trailer above is much more interesting if you view it as a Dracula sequel), Ryder revealed that the two actors’ Romanian wedding, as shot by Francis Ford Coppola, might have actually been the real deal.

Coppola then told The Guardian, “This is pretty authentic and I think very beautiful, because we actually did the ceremony and had the priest do the ceremony.” He continued, “So in a sense, when we were all done, we realized that Keanu and Winona really are married as a result of this scene and this ceremony.”

Considering that Dracula was made thanks to Ryder pushing the script with Coppola, maybe we can just read this as her orchestrating the entire marriage from the start. Belated congratulations, guys! And commiserations to Ryder’s husband since 2011, Scott Mackinlay Hahn.

Yet to watch Bram Stoker’s Dracula? Check out the trailer below.

What’s your favorite Winona Ryder movie? Share your thoughts in the comments.

Keanu Reeves’ 8 Best Movie Looks & How to Get Them
SelectssponsoredMay 20, 2019
What To Read Next
Load More
Search Results
Load More