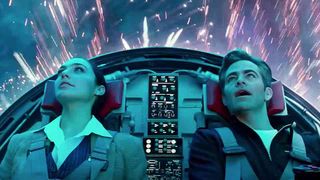 The official trailer for Wonder Woman 1984 finally dropped at São Paulo Comic-Con yesterday, and as you might expect, Twitter has found a lot to get excited about. Shortly after the trailer arrived, fans took to social media to share their thoughts on its metal-heavy soundtrack, brilliant casting, its clever homages to the original comics, and its super ’80s vibe. Watch it above.

Of course, Gal Gadot — who stars as Wonder Woman — is the star of  Twitter’s new favorite gifs. There appears to be nothing but respect for Diana Prince’s fierce lassoing, her super-human combat skills, next-level armor, and ability to ride a lightning bolt.

The trailer also offers a first peek at Wonder Woman’s iconic jet, the villainous Max Lord character (played by Game of Thrones’ Pedro Pascal), and Cheetah (played by Kristen Wiig). Check out the best reactions below.

Me, getting comfortable to sit down and watch the #WonderWoman1984 trailer on loop. pic.twitter.com/uTokA47Lig

Nothing but respect for my Wonder Woman. @GalGadot #WW84 pic.twitter.com/AVOEfjnbTV

Gal Gadot looked so damn beautiful in that WONDER WOMAN 1984 trailer. She was seriously born to play such an iconic superhero character. #WW84 pic.twitter.com/NzTNU4Lf2J

Yeah Bruce has never known a woman like her. #WW84 pic.twitter.com/MIcn5k89lm

And all those Easter eggs.

this parallel is art in its purest form #WW84 pic.twitter.com/5NCkbmW1Nb

Although we’re still trying to figure out how Steve Trevor is back?

how the hell is steve trevor back in wonder woman 1984 pic.twitter.com/mkt9h5uwvz

can't believe my cameo in Wonder woman 1984 made it into the trailer pic.twitter.com/SIKl13olyk

Warming Up with Sloane Stephens, the First Woman to Bring the Jumpman to the Tennis Court
SneakerssponsoredAugust 27, 2019
What To Read Next
Load More
Search Results
Load More