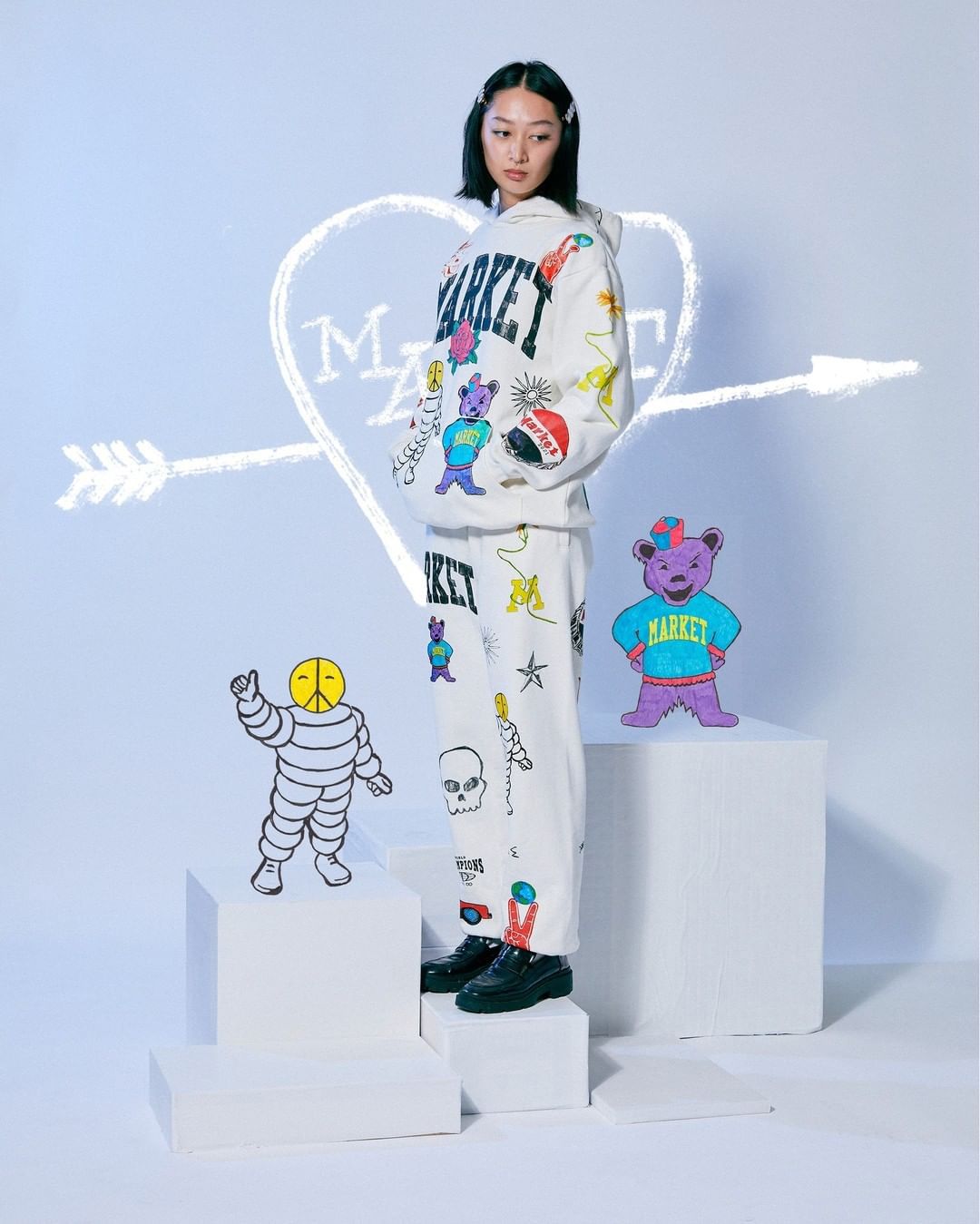 The now-cult LA-based streetwear brand and bootleg label Chinatown Market is the brainchild of Mike Cherman, which since launching in 2016 is turning fast fashion literally on its head and spawning a devout following in the process. Tapping into the rebellious spirit of New York’s Canal Street – a place where Cherman spent many afternoons with his dad as a kid – think of it as taking the most in-demand references and viral moments in popular culture and mashing them together.

Having dropped out of Parsons, via landing a job at the Nike customization store, Cherman got his start with a batch of bootleg shirts as he couldn’t afford the stuff he wanted to wear. Sampling some of Canal Street’s finest, including “Fuck you you fucking fuck” and “Thank you have a nice day,” among the merch was also the now infamous Frank Ocean/Nike Swoosh mash-up T-shirt, (a reference to the Frank Ocean song “Nikes”) all of which were displayed in a booth during the ComplexCon trade show.

It caused a total frenzy and the booth was rinsed by the end of the day, the Frank Ocean/Nike shirt alone racking up $45,000 in online sales in less than 24 hours. Cherman didn’t get to keep the money, though, as he was sued by Ocean for trademark infringement. But the seed had been planted and Cherman was motivated to find a way to keep doing this legally; sold on the idea of a reactionary DIY culture, inspiring small labels and activating the next generation of creators.

What followed next was a succession of instant splashes, such as the bootleg Chucks with the Nike swoosh, which were gifted to and worn by LeBron James before the NBA finals, and later ending up on the feet of Nigo and Erykah Badu. One of Chinatown Market’s greatest coups however might be the iconic Acid House smiley – the logo is part of a licensing deal with the original London-based company SmileyWorld that’s been putting a smile on the world for decades – and has resulted in Smiley emblazoned tees, basketballs and ping pong paddles. Somewhere along the way Cherman also forged working relationships with the likes of Nike, Converse, Vans and PUMA to name just a few.

Coupling bold colored tees with whimsical, instantly recognizable graphics and funky elements (such as the latest UV-reactive Converse collab) the process in Chinatown Market’s 12,000 square foot creative warehouse space is fast: from hatching a new idea by 7 a.m., by lunchtime it will already be online and produced by end of play the same evening, ready to be shipped out the following morning. But without cutting corners on quality.

The drive to be easily available for everybody sets the label apart from the exclusivity-club of many other streetwear brands, and you can cop their stuff in major retailers like Urban Outfitters. In an ironic twist, perhaps, knock-off Chinatown Market gear has even surfaced in China, cementing the young label’s cult status for rehashing pop culture.

Art & Collectibles For the Final Weeks of Zoom Backgrounds
SelectssponsoredApril 23, 2020

Sponsored Story
Here’s How We Spent $300 at Urban Outfitters
SelectssponsoredMarch 9, 2021