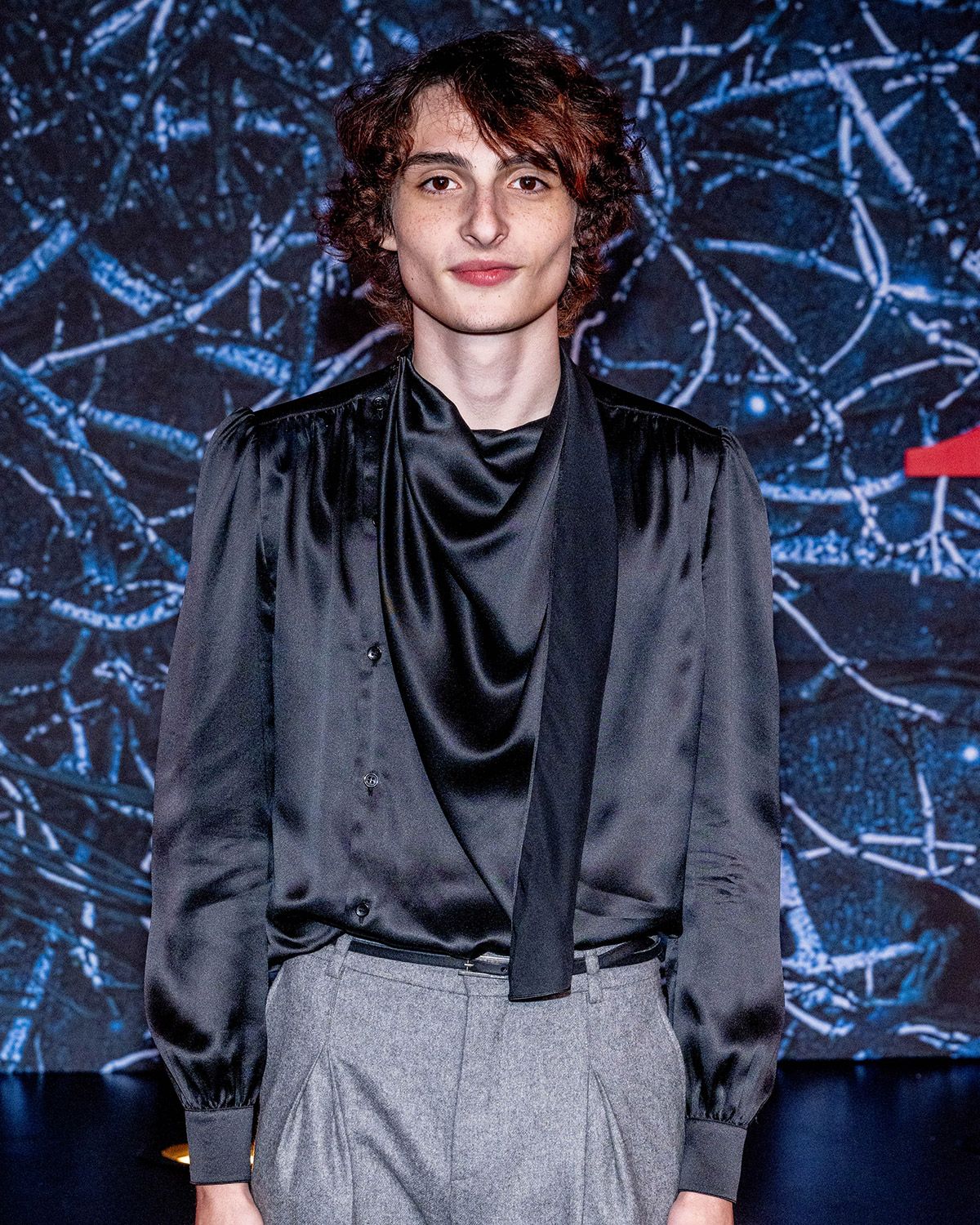 Who is Finn Wolfhard?

Finn Wolfhard is the lanky, curly-haired Canadian actor. He shot to international fame with his role as Mike Wheeler in the Duffer brothers’ cult Netflix series Stranger Things. First aired in 2016, the series was an instant hit worldwide, resulting in an ensuing ’80s fever. Wolfhard, then aged 13, famously landed the role with an audition tape from his bed as he was sick.

Humble and insanely likable, Finn Wolfhard from Stranger Things has amassed a near 30 million following on Instagram to date, his every move somewhat inadvertently providing instantly memeable material. Besides Finn Wolfhard’s acting career, he’s an incredibly talented musician and has even directed short films himself.

How old is Finn Wolfhard?

How tall is Finn Wolfhard?

Where is Finn Wolfhard from?

What movies is Finn Wolfhard in?

On the back of his Stranger Things breakthrough, he also garnered recognition for his role in the film adaptation of Stephen King’s It (2017) and a pizza delivery boy role in the movie Dog Days (2018) before returning for the sequel of It: Chapter Two (2019).

In 2019 he co-starred in the highly anticipated movie The Goldfinch, the adaptation of Donna Tartt’s Pulitzer Prize-winning novel. Also, he voiced the character Pugsley in the animated film The Addams Family.

In 2020 releases, Finn co-stars in a horror drama, The Turning, a new adaptation of The Turn of the Screw – overseen by Steven Spielberg – and a role in Ghostbusters 2020, which is a direct sequel to the iconic 1989 movie.

Finn’s latest acting projects include a starring role in When You Finish Saving the World next to Julianne Moore, which opened the 2022 Sundance Film Festival.

Other upcoming films and series include the much-anticipated season 5 of Stranger Things, animated drama Pinocchio, fantasy movie The Legend of Ochi, and comedy Hell of A Summer.

Wolfhard has also appeared in various music videos, including Weezer’s retro music video for the ’80s smash hit Take On Me.

How did Finn Wolfhard become an actor?

Hailing from Vancouver, Wolfhard started out at the age of 11 with roles in the sci-fi series The 100 and Supernatural. But how did Finn Wolfhard start acting? Wolfhard was actually first passionate about filmmaking and not acting, following in the footsteps of his father, Eric Wolfhard.

Intending to become a director and not an actor, Finn found acting was a good way to get a foot in the door in the industry. And in fact, unlike the traditional approach of signing up with an agent, Finn found his first acting gig via a Craigslist ad.

Does Finn Wolfhard have siblings?

Yes, Finn Wolfhard has one older brother, Nick Wolfhard, who is also an actor.

Is Finn Wolfhard in a band?

Yes, Finn from Stranger Things is in a band — as music is his other passion next to acting. Between his busy acting schedule and modeling, the multi-talented Wolfhard is also nurturing a promising career in music.

Wolfhard was the lead vocalist for alternative indie rock band Calpurnia, a band that Finn founded in 2017. He proved to the world that he can shred on guitar already back in 2016, though, when he joined Mac DeMarco on stage to play, with Instagram videos of him rocking it out sitting on DeMarco’s shoulders going viral.

Even though Calpurnia’s been inactive since 2019, Wolfhard didn’t wait long to launch his new band, The Aubreys, merely a year later. With bandmate Malcolm Craig, they’ve since released their first EP, “Soda & Pie,” followed by Karaoke Alone and “Smoke Bomb.”

How old was Finn Wolfhard when he started acting?

Finn Wolfhard was 11 years old when he first started acting.

Who does Finn Wolfhard play in Stranger Things?

What was Finn Wolfhard's first movie?

Finn Wolfhard’s first movie was the American horror movie It in 2017, and his first acting role in the TV dystopian science fiction TV series The 100 in 2014. He also made his debut directing with the comedy short Night Shifts in 2020.

Does Finn Wolfhard have his own clothing line?

Rumor has it that the new Hollywood fav will launch a new Finn Wolfhard clothing line called “Holy Name,” in collaboration with actor Cole Sprouse. However, that remains unconfirmed, as nothing was ever officially announced.

Even though the Finn Wolfhard clothing line is yet to be confirmed, in March 2019, he collaborated with Pull&Bear on a Stranger Things-inspired capsule collection with Sadie Sink (Max from Stranger Things).

Yes, Finn Wolfhard has also made his modeling debut, tapped as the new face of Saint Laurent, fronting the Fall/Winter 2019 campaign under the direction of Anthony Vaccarello, photographed by the legendary photographer David Sims. Finn Wolfhard’s modeling career also includes modeling for Gucci in the past.

Finn Wolfhard makes his acting debut in the post-apocalyptic TV series The 100, playing a minor character role of Zoran in the second season. A year later, he appeared as Jordie Pinsky in the series Supernatural.

Finn Wolfhard is cast in the popular Netflix TV series Stranger Things, portraying the character of Mike Wheeler, after he auditioned for it via an open casting call.

Wolfhard, along with other cast members, won a SAG (Screen Actors Guild) award for outstanding performance in the supernatural drama series Stranger Things.

In the same year, he landed a role in the horror movie It, portraying the character Richie Tozier, which was also his first debut feature film. The same year, Wolfhard co-directed his first music video for the Spentime Palace song “Sonora.”

On the music side, Wolfhard with his fellow bandmates formed an indie rock band Calpurnia, consisting of Finn as lead vocalist, Malcolm Craig on drums, Ayla Tesler-Mabe as lead guitarist, and Jack Andreson on bass. The band released several singles, including Greyhound and Scout; however, in November 2019, they announced their parting ways.

Wolfhard is cast in the comedy movie Dog Days, directed by Ken Marino, portraying the character of a pizza delivery boy. He also signs with a new talent agency, CAA.

A year later, Finn continues his role as a young Richie Tozierin flashbacks in the movie It: Chapter Two and is cast to play young Boris in the drama film The GoldFinch, written by Peter Straughan and adapted from the 2013 novel by Donna Tartt.

During the same year, in May, Wolfhard became the new face of Saint Laurent, debuting in the brand’s Fall/Winter 19 campaign.

Between 2019 to 2020, he lends his voice to an animation TV series Carmen Sandiego as one of the main characters.

Finn Wolfhard lands a role in the horror film The Turning, Henry James’ adaptation of The Turn of the Screw, and co-stars in the adventure film Omniboat: A Fast Boat Fantasia.

Wolfhard then starred in a short film, Rules for Werewolves, based on writer Kirk Lynn’s debut novel, and made his directorial debut with the comedy short film Night Shifts at the young age of 17.

On the music front, the Stranger Things Canadian actor formed a new band, The Aubreys.

In 2020, Wolfhard was included in Forbes 30 under 30 of 2020 in the Hollywood and Entertainment category.

Finn Wolfhard co-starred in Ghostbusters: Afterlife with Carrie Coon, playing the character of Trevor and portrays Ezra in an apocalyptic comedy, How It Ends.

He also co-stars as Ziggy in a comedy-drama When You Finish Saving the World with Julianne Moore, a movie directed by Jesse Eisenberg that got nominated for the Golden Camera award at Cannes Film Festival.

Finn Wolfhard continues his role as Mike Wheeler during the fifth season of Stranger Things, which will be the last grand finale to the popular Netflix series, set to release in 2023 or 2024.

In the same year, he was also cast in the fantasy film The Legend of Ochi as the character Petro, along with Willem Dafoe and Emily Watson, set to premiere in 2023.

Wolfhard also appears in a horror comedy film Hell of A Summer and has been confirmed as cast in the Ghostbusters Afterlife Sequel.