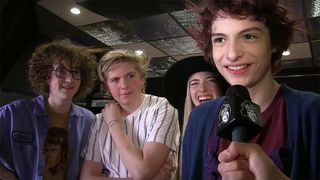 If you were under any illusion that Finn Wolfhard — aka Mike from Stranger Things — and his band Calpurnia weren’t lovable AF, then their interview with Nardwuar the Human Serviette will change your mind. Watch the interview, which takes place at Vancouver’s HippoSonic Studio, above.

Having caught his breath after chasing down Lil Uzi Vert, Nardwuar leads Wolfhard and his bandmates through a number of topics — from collecting vintage Beatles posters to how the members met to Wolfhard going to the same elementary school as Grimes. Unavoidably, the 21-minute conversation also touched on Netflix’s Stranger Things, namely how flexible his character’s collectable doll is.

Calpurnia formed in 2017 and have released a number of hit singles and an extended EP, Scout, which dropped earlier this year.

Are you a Calpurnia fan? Let us know in the comments.

In other news, Kendrick Lamar, SZA, and Thom Yorke have been shortlisted for 2019 Academy Awards.

All the “Losers” Explain Everything You Need to Know Before You See ‘It Chapter Two’
MoviessponsoredSeptember 8, 2019