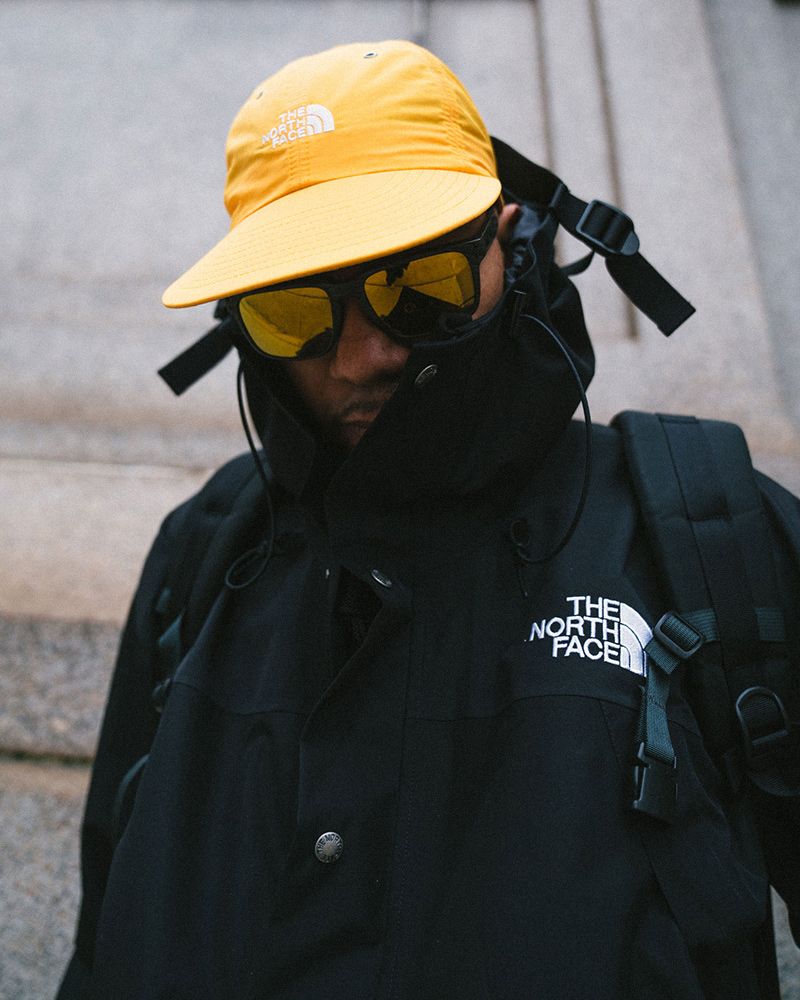 Founded by husband and wife Douglas and Susie Tompkins in 1966, acquired by Kenneth Klopp two years later and ultimately taken over by the VF Corporation in 2000, The North Face has specialized in technical mountaineering equipment and apparel including sleeping bags, hiking packs, tents, skiwear and high-performance outerwear, as well as performance apparel, footwear and equipment for explorers, climbers and endurance runners (among others).

By the late 1990s, the notoriety of The North Face’s attire meant that its customer pool expanded beyond those merely looking for technical clothing and entered the lives of rappers and various other subcultural stylings; for instance, the North Face’s Tech Steep jacket featured in Wu-Tang’s Method Man music video in 1993. That withstanding, the fashion and music scene remains only a small part of the company’s business, with it focusing more intently on creating advancements within outerwear and equipment for serious hikers and climbers.

Show
How did The North Face get its name?

The name of the company is based on the north face of the Half Dome in Yosemite, California, to which attention was given on the generalization that the north face of a mountain in the northern hemisphere is regarded as the coldest, iciest and thus the most formidable to climb.

Show
What is The North Face logo?

The North Face logo is also of the north face of Half Dome in Yosemite, California. While now being on the front left, in the earlier days of the brand the logo was on the back shoulder to ensure that The North Face articles of clothing would be recognized when photographing, filming or even just observing a climber scaling up walls.

Items listed as waterproof by The North Face are used with the GORE-TEX® membrane that is completely impervious to rain, snow and sleet whilst allowing for the wearer to sweat from within. Furthermore, its DryVent™ fabrics are engineered to similarly be totally waterproof using a multiple layer construction engineered to allow water vapour (swear) to pass through from the inside to the outside.

Show
How do you wash a jacket from The North Face?

The North Face recommends not using a top-loader machine with an agitator as it may damage the internal construction, rather washing it in warm water with a mild power detergent (and no bleach) on a gentle cycle. Post-wash rinsing and spinning is also recommended to remove any residual soap and to remove excess water.

The North Face is founded in San Francisco, California.

The production of the first apparel item – the down coat known as the Sierra parka.

Introduction of the first tent into production lines.

Revolutionized the tent design with the Oval Intention model; lightweight design with a high level of strength and thermal resistance.

Introduction of the concept of the shingled sleeping bags, which has gone on to become the norm for climbers.

Continuation of innovative products such as the Mountain jacket, Gore-Tex clothing and an entire line of skiwear and gear.

Collaboration between Apple and The North Face.

Filing for Chapter 11 bankruptcy, closing outlets stores and narrowing down the product line to only profitable items.

The company was sold at auction for $62 Million to a group that would become The North Face, Inc; expanding into casual clothing as well as keeping its tents and outerwear for professional climbers.

The company’s new management brings The North Face back to a profitable state, and it continues to reaches back to being a world leader in innovative cold weather gear and climbing equipment.

Collaboration between Supreme and The North Face starts.

Douglas Tomkins, founder of The North Face, dies in a kayaking accident in Chile.

Logomania is Back, Thanks to Supreme x The North Face
StylesponsoredOctober 18, 2021

DIY a Nuptse With The North Face’s Customization Program
StylesponsoredOctober 7, 2021