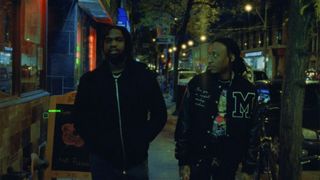 One of the more exciting hip-hop exports to come out of Canada in recent years is 88GLAM, the Toronto duo scooped up by The Weeknd’s XO Records imprint in late 2017. Comprised of Derek Wise and 88 Camino, the pair has steadily made moves ever since and their success caught the attention of Havana Club.

No stranger to creative collaborations, Havana Club linked with Wise and Camino to recount the fateful day they signed with XO Records and how sometimes being at the right place at the right time could change everything. “It was this loft apartment in Kensington Market, probably like 4-5 bedrooms, and by chance, the leases in that building ended. Me and five of my friends jumped on it,” Wise recalls. “It started as us having fun and partying every night. I guess word just spread out; it turned into this thing where, by midnight, there was no other place like ours.”

After successfully converting their new digs into a makeshift underground club, it eventually became a hub for people from all over to chill and let loose. “Being in a setting where you don’t see this combination of people often, you have to be very open-minded to view the world from other people’s perspectives. But the one thing that brought us together was partying,” explained Camino. “‘Why don’t you pop by for a drink?’ [You] start exchanging art. You never know what can come from that really.'”

With three acclaimed mixtapes under their belt — the self-titled 88GLAM, 88GLAM RELOADED, and 88GLAM2 — a feature on NAV’s second studio album, and a 21-date North American tour last year including their first Coachella performance, the partners in rhyme are shaping up to be one of the industry’s most intriguing and influential musical collectives.

“You begin to understand what music can do for people,” explained Camino. “People just dancing, having fun, socializing.” While they were in town, Havana Club even helped them film a music video for an upcoming project.

See what 88GLAM’s been cooking up in the short film above, and look for a special edition Havana Club bottle they helped design dropping soon as their partnership continues to grow throughout 2020.

This Is Why Master P & Romeo Miller Are Quitting ‘Growing Up Hip Hop’
MusicsponsoredMarch 3, 2020

Every RIMOWA Collaboration You Need to Know About
DesignsponsoredJune 14, 2018
Follow
Highsnobiety Music
What To Read Next
Load More
Search Results
Load More