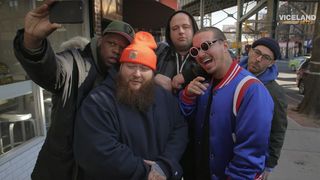 Last month, we received our first taste of the third season of Action Bronson‘s VICELAND TV show, Fuck, That’s Delicious. Now, ahead of its premiere on the network, we have the entire first episode, starring Bronson and his band of eccentrics.

In season three, episode one, Bronson, Meyhem Lauren, The Alchemist, and Big Body Bes make their way to Queens for some culinary treats. This season of Fuck, That’s Delicious will see Bronson and company exploring the five boroughs of New York City, as well as New Jersey.

For more, see underneath as 2 Chainz hangs out with mermaids in ‘Most Expensivest.’