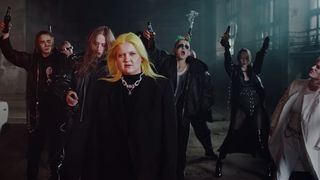 Finnish pop singer ALMA just dropped a new single called “When I Die,” and a video to go with it.

Filmed in her native Finland, the “When I Die” video shows a gothic last supper and ALMA digging her own grave, which is very in keeping with the singer’s desire to make “pop, but darker.”

The 23-year-old said, “This song was born from a big conversation about when and how we leave the world is so out of our control. We spend so much time worrying about things out of our control… I wanted the video to look like our last party, what might the night look like if we knew this was it.” Watch the video above.

The neon-haired singer’s debut album Have You Seen Her? is slated for release April 5. “When I Die” is the second release from the album, and fans can expect a steady release of new tracks with “accompanying visual.” Whether this means every track on the album will receive a video remains to be seen, but let’s hope so.