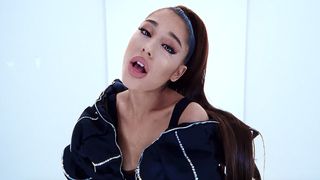 Ariana Grande has dropped the official music video clip for “in my head.” The track comes off her fifth studio album, thank u, next. Watch the video above.

The revealing and intimate “in my head” was directed by Bardia Zeinali. Grande’s internal world manifests in the form of a white room, reminiscent of music videos of the late ’90s and early ’00s. Rather than backup dancers, however, the Grammy-winning singer is accompanied by disembodied thigh-high boots and Grande’s signature pony-tail.

The track contains what many assume are references to the late Mac Miller, as well as repeated mentions of angels, an image Grande has often invoked to talk about Miller. Watch the video above and let us know what you think.