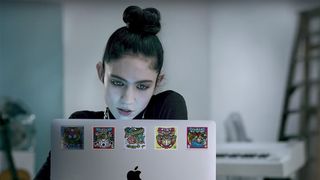 Apple has dropped four new ads highlighting the creatives who use its laptops. Labeled “Behind the Mac,” the ads showcase the ways people use their MacBooks, from making music to editing images and coding. In one of the clips, Grimes explains how she creates her music, edits her videos, and produces her artwork on her laptop.

The second shows how the legally blind photographer Bruce Hall edits his work using his Mac’s accessibility features, and the third explains how entrepreneur Peter Kariuki coded an app to make taxi journeys safer in Rwanda.

Finally, the last in the series is a feel-good montage of creatives working behind their laptops to the soundtrack of Daniel Johnson’s “The Story of an Artist.”

Watch Grimes’ ad above and check out the rest of the “Behind the Mac” campaign below.

Apple’s New Mac Book Pro Has Killed Off Its Most Unpopular Feature
DesignsponsoredMay 4, 2020

Apple Celebrates the History of MacBooks in Anime With an Adorable New Ad
DesignsponsoredFebruary 29, 2020