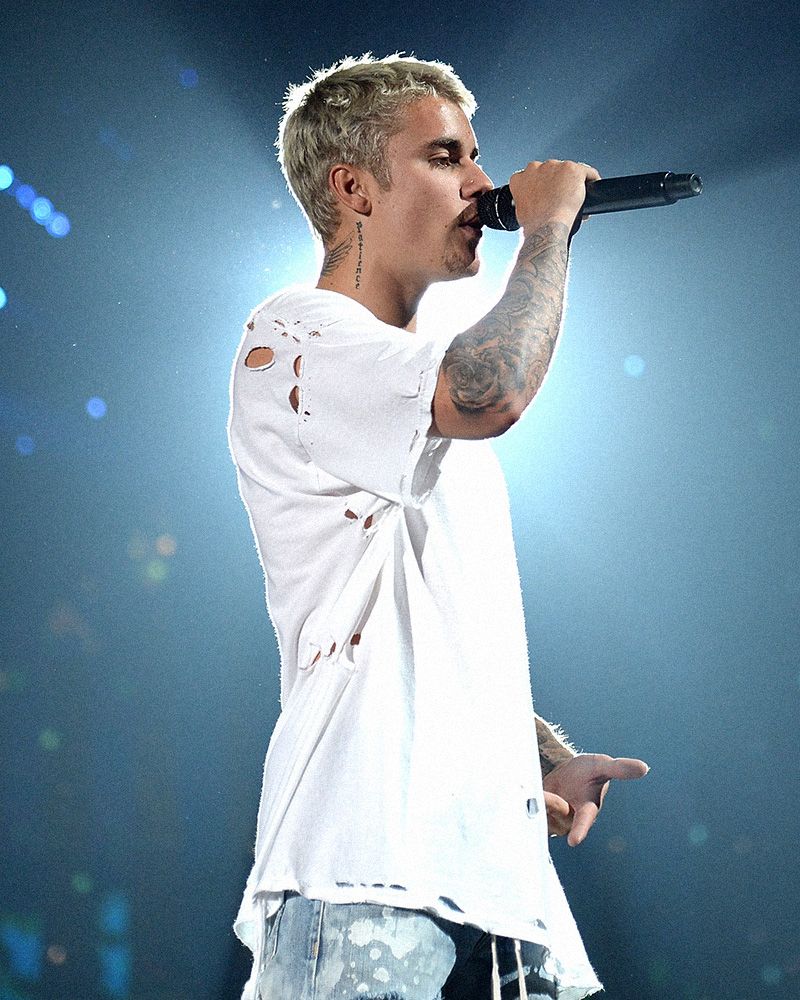 Who is Justin Bieber?

Justin Bieber is a Canadian singer and songwriter who achieved success in the pop music industry at a very young age after being discovered by American Record industry entrepreneur Scooter Braun, who saw the then-12-year-old star covering pop songs by Usher and Chris Brown on YouTube.

Bieber gained worldwide fame after his debut single “One Time” in 2009. Throughout his music career, the pop icon has sold roughly over 150 million records worldwide. Some of the most popular best Justin Bieber songs include “Stay” (2021), “Ghost” (2021), “Peaches” (2021), and older songs, “Where Are Ü Now” (2015) and “Baby” (2010). Naturally, Justin Bieber is also a Hollywood style icon, who has got his unique style seen sporting western wear, skater looks, or experimenting with a graphic ’90s style Kanye t-shirt.

How old is Justin bieber?

Does Justin Bieber write any songs?

Justin Bieber has said he is involved in the songwriting process and co-writes a lot of his own music while teaming up with other songwriters and professional producers.

How tall is Justin bieber?

Who is Justin Bieber married to?

Justin Bieber is currently married to Hailey Bieber — the couple tied the knot in September 2018 at the Montage Palmetto Bluff in Bluffton, South Carolina.

How old was justin bieber when he sang baby?

Justin Bieber was merely 15 years old when he recorded his first hit single, “Baby” ft. Ludacris in 2009, at the Triangle Sound Studios The Ludaplex in Atlanta, Georgia. However, the song was released on January 18, 2010.

How much is justin bieber worth?

Justin Bieber’s net worth is reportedly roughly around $285 million (as of 2022).

Where does Justin Bieber live?

Where is Justin Bieber from?

Justin Bieber was born and raised in Ontario, Canada.

Bieber was discovered by Scooter Braun, an American entrepreneur who founded record labels RBMG Records and Schoolboy Records. Bieber was signed with RBMG Records in 2008 at the young age of 15, gaining fame after his first debut album, My World, was released in 2009.

While searching for YouTube videos of another singer, Scooter Braun accidentally clicked on one of Bieber’s videos of him busking at a local Ontario theater in 2007. He came away so impressed that he immediately began searching for the theater in Bieber’s video, eventually tracking down his school and calling its board members to get in contact with Bieber’s mother. His mother was initially reluctant to agree to Braun’s star-making overtures for Bieber but relented on the advice of church elders.

At 13, Braun took Bieber to Atlanta to record demos, and a week later, he was singing for Usher. Soon thereafter, Usher and Justin Timberlake’s management companies bid for Bieber’s signature, with Usher winning out. By 2008, Braun was Bieber’s manager, and the rest is a very, very well-documented history.

When did justin bieber get famous?

Justin Bieber got famous globally with his first hit single, “One Time,” released in 2009, which was a few months later re-released on his debut R&B and pop-infused album My World 2009. He was first seen in a YouTube video as a 12-year-old cover singer.

Raised by a single mother, Bieber had humble beginnings precipitating his work ethic and meteoric rise. Bieber played the guitar, piano, drums, and trumpet growing up, but as a pre-teen, his singing kicked off his career in Music. His mother planted the seeds for Bieber’s life as a pop idol by uploading videos of him singing to YouTube during the site’s infancy, making him one of the first major internet celebrities.

When is Justin Bieber's birthday?

Justin Bieber’s birthday is on the 1st of March.

What was justin bieber's first song?

Bieber’s first song was the hit single “One Time” from his debut EP, My World, released in 2009.

How many Grammy Awards does Justin Bieber have?

The Canadian-born singer Justin Bieber has won two Grammy Awards and has been nominated a total of 22 times. Interestingly, although the iconic pop star rose to fame for his pop Music, his Grammys are for “Where Are Ü Now” in 2016 with electronic Music DJ-duo Jack Ü (Skrillex and Diplo), and for a country song segment “10,000 Hours” with pop duo Dan+Shay in 2021.

Who wrote ghost by Justin bieber?

How long has Justin Bieber been active?

Scooter Braun accidentally discovers him while searching for videos of another singer on the site and convinces Bieber and his mother to sign with him and Usher. With Usher’s help, Bieber receives his first record deal.

Bieber begins recording his debut album. His first single, “One Time,” peaks at no. 17 on the Billboard Hot 100 and goes platinum. In November, he released his first project, My World, an EP.

Bieber released his full-length debut album My World 2.0 to a no. 1 Billboard debut, making him the youngest male solo artist to top the album charts since Stevie Wonder in 1963.

The album’s single “Baby” breaks out as an international hit, supported by the strength of Bieber’s debut, an acoustic version, My Worlds Acoustic, released in November.

Bieber begins dating Selena Gomez on and off.

In June, Forbes named Bieber on their list of Best-Paid Celebrities Under 30 for the first time.

The youngest person on the list at just 17, Bieber reportedly made $53 million in the 12 months prior to the list’s release.

In November, Bieber released a Christmas album called Under the Mistletoe to a no. 1 album debut.

By the end of the year, Bieber began recording his third album, Believe.

He released his third studio album, Believe to another no. 1 album debut.

Bieber moves away from the teen pop sounds of his earlier songs, taking on more contemporary pop and R&B notes.

Embarks on a 10-week campaign called Music Mondays, dropping one new song every week leading up to the release of his second film Justin Bieber’s Believe. Those 10 tracks and five new ones are produced into a compilation album, Journals.

Released his fourth studio album, Purpose, to a no. 1 album debut.

Wins his first Grammy for Best Dance Recording with the song “Where Are Ü Now.”

The Chinese government bans him from performing in China, citing his past behavior.

Breaks up with Selena Gomez for the last time.

Launches his own streetwear label, Drew House, with a Drew House pop-up in Hong Kong in the same year.

Bieber and Ariana Grande released the single “Stuck with U.”

Became the youngest solo artist with eight albums peaking at number one in the US charts.

Justin Bieber became a proud owner of a celebrity must-have, a Bored Ape Yacht Club (BAYC) NFT for a cool $1.31 million, later adding a second NFT to complement it.

Bieber was in Balenciaga 2022 campaign along with Kim Kardashian and Isabelle Huppert.

In January, Bieber became the most-listened artist in Spotify history.

Behold the Stark Contrast of the Biebers’ Halloween Costumes
StylesponsoredOctober 31, 2022

A Wearable Tribute to Kanye By Justin Bieber
StylesponsoredAugust 22, 2022

Hey Dad, Can I Borrow Your Jorts This Summer?
StylesponsoredJuly 14, 2022

Justin Bieber Is Back in His Middle School Bag
StylesponsoredJuly 1, 2022

The Top 25 Justin Bieber Songs of All Time

Behold the Stark Contrast of the Biebers’ Halloween Costumes
StylesponsoredOctober 31, 2022

A Wearable Tribute to Kanye By Justin Bieber
StylesponsoredAugust 22, 2022