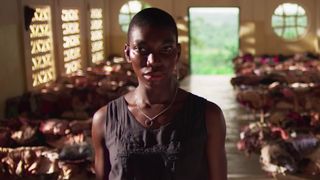 Netflix has another fresh series lined up for this month with Black Earth Rising, a drama/thriller written and directed by Hugo Blick about the prosecution of international war criminals. It originally aired for UK audiences last fall.

The eight-part season follows the the journey of Kate Ashby portrayed by Michaela Coel. As a child, she escaped a war-torn Rwanda and was adopted by a white family in London, as she now tries to discover the truth of her past. Years later, she hopes to figure out just how she was able to survive a genocide.

Along the way, she is helped in her search by lawyer Michael Ennis played by John Goodman, in addition to a number of shady individuals, who might have clues to the real reason she was able to escape her tragic past.

Enjoy the trailer above as Black Earth Rising comes to Netflix on January 25.

In other Netflix news, their new Ted Bundy true crime documentary might be its most harrowing yet.

A Teenage Girl Is Raised by a Robot to Repopulate Earth in Netflix’s ‘I Am Mother’
MoviessponsoredMay 9, 2019

7 ‘Black Mirror’ Episodes That Are Likely to Become Reality in the Very Near Future
In-DepthsponsoredJune 11, 2019
What To Read Next
Load More
Search Results
Load More