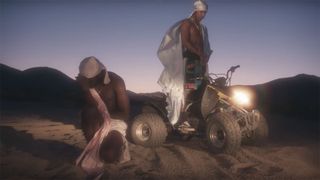 As promised, this morning Dev Hynes, aka Blood Orange, shares the much-anticipated video for his Negro Swan collaboration with A$AP Rocky, “Chewing Gum.” The two, along with fellow contributor Project Pat, debuted the track back in August on Jimmy Kimmel Live!.

As is the tendency with Blood Orange, the talented creative directed the “Chewing Gum” aesthetic, which highlights Hynes and Rocky at the beach. Sporting flowing, silk durags, the two musicians then whip around the sand on four-wheelers, all while performing the ethereal song.

Press play above to check it out, then see underneath to revisit Blood Orange’s Negro Swan.