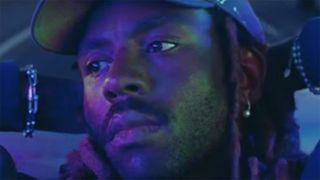 Dev Hynes, aka Blood Orange, has been quite the busy man as of late. After recently scoring the “Sounds of Space” trailer for James Gray’s new space epic, Ad Astra, starring Brad Pitt, the 33-year-old musician releases an official music video in support of his latest project, Angel’s Pulse.

The clip for “Dark & Handsome” was directed by Blood Orange himself, as we see shots of the artist interspersed with footage of a group of people running down the beach. Collaborator Toro y Moi also appears towards the end of the clip on Hynes’ mobile phone screen.

“Dark & Handsome” is the second video from Blood Orange’s July 2019 mixtape, Angel’s Pulse, following “Benzo.” Fans of the multi-talented artist can purchase the deluxe LP bundle, including the mixtape on pink vinyl and an Angel’s Pulse T-shirt, here. You can also buy tickets to see Blood Orange at Camp Flog Gnaw at Dodger Stadium in Los Angeles on November 9 and November 10.