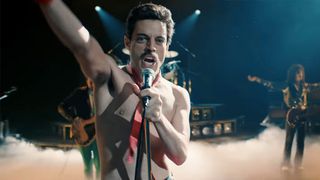 Following an official teaser from back in May, 20th Century Fox shares a new trailer for its upcoming Queen/Freddie Mercury biopic, aptly titled Bohemian Rhapsody. The film finds 37-year-old American actor Rami Malek playing one of the most beloved entertainers ever in Freddie Mercury.

Bohemian Rhapsody focuses on Queen’s meteoric rise to fame, with a deeper look at the highs and lows of lead singer Freddie Mercury. The movie also delves into the band’s iconic discography and revolutionary sound, leading up to their unforgettable performance at London’s Wembley Arena for Live Aid 1985.

Next up, see Snoop Dogg, Warren G, and Nate Dogg in the trailer for YouTube‘s ‘G Funk’ documentary.