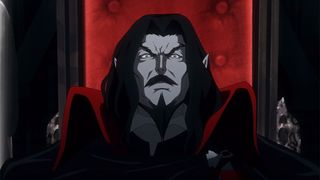 Season two of Netflix‘s animated vampire series Castlevania is due out in October. Ahead of the premiere, the streaming service has shared the official trailer for the upcoming selection of episodes.

While revealing the clip, executive producer Adi Shankar had this to say: “We’re here to create the greatest video game adaptation of all time.”

And although season one of Castlevania boasted just four episodes, the forthcoming season is getting a double dose at eight installments. You can read a synopsis for season two below.

“Returning to Netflix for a second season, Castlevania, inspired by the classic videogame series, is a dark medieval fantasy following the last surviving member of the disgraced Belmont clan, trying to save Eastern Europe from extinction at the hand of Vlad Dracula Tepes himself. Trevor Belmont, last survivor of his house, is no longer alone, and he and his misfit comrades race to find a way to save humanity from extinction at the hands of the grief-maddened Dracula and his sinister vampire war council.”

Castlevania season two is scheduled to arrive on Netflix October 26.

In other Netflix-related news, season three of ‘Stranger Things’ has been delayed until Summer 2019.