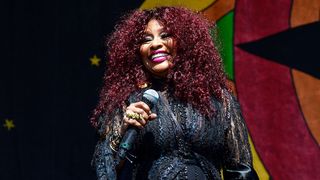 Last night, Chaka Kan made a guest appearance on Watch What Happens Live with Andy Cohen. When the topic of Kanye West sampling “Through the Fire” came up in conversation, the music icon unloaded all of her pent up feelings about it. The track originally appeared on West’s 2004 debut album, College Dropout.

“He called me when he just got out of the hospital. He said, ‘You were so instrumental in my healing process. I changed the words a little bit to the song, but I had to eat through a wire. Jaws wired shut through a straw,'” she said. “It meant that much to me. It really got my heart, tugged at my string. I was like, ‘Yeah, use it.’ Then when it came out, I was pissed… It was a little insulting. Not insulting, I thought it was stupid! If I’d known he was gonna do that, I would have said, ‘Hell no.'”

Earlier this year, Chaka Khan dropped her 12th studio album Hello Happiness. She also recently launched a wig line with Indique Hair. Watch Chaka Khan go off about West in the video above.

While you’re here, revisit our piece about how Kanye West changed hip-hop forever with his debut album. Kanye West’s YEEZY 451 Sample Is Even More Wild Than We Imagined
SneakerssponsoredMay 6, 2020

Kanye, Drake & Cardi B Get Trolled More Than Any Other Artists on Twitter
MusicsponsoredFebruary 20, 2020

Kanye West Just Stepped Out in a Canadian Tuxedo & We’re Into It
StylesponsoredOctober 22, 2019
Follow
Highsnobiety Music
What To Read Next
Load More
Search Results
Load More