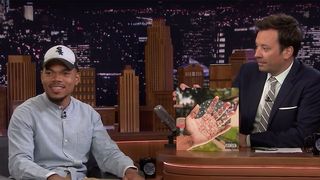 Earlier this year, we got the news that Chance the Rapper would be dropping an album sometime this summer. Ever since then we’ve tried to gather all the information we can about the upcoming  project, but Chance has been unnervingly coy. Until now, that is. Chance sat down with Jimmy Fallon and revealed that The Big Day — that’s the title of his long-awaited debut studio album — is scheduled to arrive next week, July 26.

In the interview, Chance revealed why the album was such a big deal for him. “I haven’t sold my projects before. All my mixtapes were free,” he explained. The rapper told the NBC studio audience that he’d struck a deal with Fallon: he would share information on the album if Jimmy would preorder it at ChanceRaps.com. Fallon obliged on-stage, prompting Chance to announce the album title, artwork and release date. Watch the reveal above.

The Internet Is Here for Chance the Rapper’s Album ‘The Big Day’
MusicsponsoredJuly 27, 2019

Chance the Rapper Says He Feels Fans Want Him to Kill Himself Over ‘The Big Day’
MusicsponsoredAugust 6, 2019

Highsnobiety Review
Chance the Rapper Struggles to Shine Through on the Unwieldy ‘The Big Day’
MusicsponsoredJuly 31, 2019

Chance the Rapper Really Loves His Wife & Twitter Is Trolling Him for It
MusicsponsoredAugust 1, 2019
Follow
Highsnobiety Music
What To Read Next
Load More
Search Results
Load More