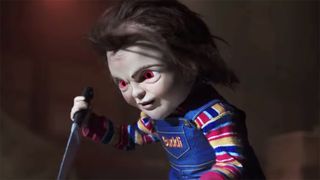 As we are now less than a month away from the release of director Lars Klevberg’s Chucky reboot, Orion Pictures this week gives us another look at Child’s Play courtesy of a new TV spot. Titled “Playtime,” the clip ultimately finds Chucky doing what he does best as he embarks on a violent killing spree.

Are we having fun now? From the producers of IT comes CHILD’S PLAY, in theaters nationwide June 21. ? #ChildsPlayMovie pic.twitter.com/CB5QqnYtGn

Child’s Play utilizes a screenplay by Tyler Burton Smith, which is based on the original 1988 film of the same name. In Lars Klevberg’s reboot Mark Hamill voices Chucky, while Aubrey Plaza, Brian Tyree Henry, and Gabriel Bateman star alongside. Plaza plays the mother of a young boy named Andy (Gabriel Bateman), as she gifts her son a toy doll for his birthday. There’s only one problem, the doll is defective and has been hacked to unlock limitless programming. So as opposed to the original movie where Chucky is possessed by a serial killer, here he has the technological capabilities to learn and develop violent actions.

In ONE MONTH, your friend till the end takes back the big screen. RT if you’re seeing Child’s Play opening weekend! ? #ChildsPlayMovie pic.twitter.com/DnvU5TJWYX

This Is How Grimes & Elon Musk Plan to Stop Their Child Being Too Spoiled
MusicsponsoredFebruary 21, 2020