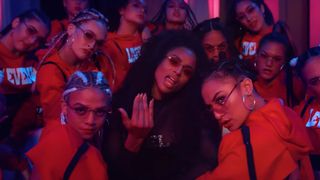 If you weren’t already aware, Ciara has been living on cloud nine by choice. Despite going through a very public breakup with Future in 2014, she managed to find love again with NFL player Russell Wilson. While the 2015 album Jackie addressed many of the issues between her and the rapper head on, the new material that CiCi has on deck seems to be all about rising above the BS and finding happiness on your own terms. Her latest single “Level Up” fully embodies this as Ciara declares that her “comeback on one hunnid'” because she refused to settle for less than she deserved. It’s essentially Beyoncé’s “Upgrade U” for the next generation.

“Thank God I never settled, this view is so much better,” she sings. “I’m chilling, I’m winning, like on another level.”

In the accompanying visual, CiCi and PARRI$ show off their dance skills and bust out into some fierce choreography with support from their own girl gang. We guarantee that the whole routine will make your jaw drop straight to the floor. Watch it all go down in the video above.

In other news, Sade has a new album in the works. Get all the details right here.