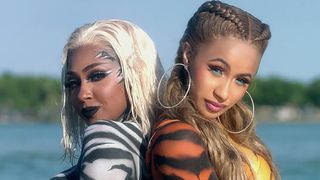 Despite the obstacles that were set against them, City Girls managed to prevail and come out on top in 2018 with two flawless records to their name. Today, the Miami-based rap duo has dropped a music video for their Cardi B-assisted anthem “Twerk.” Back in November, City Girls launched a worldwide competition to find the best twerker of all time. Not only did the winner of the challenge score a $50,000 cash prize, but she got to be featured in the DAPS-directed visual alongside the rappers and a crowd of pro twerkers as well.

Depending on your situation, this footage might qualify as NSFW so do proceed with caution. The fierce collaboration is featured on Girl Code which is available to stream on all platforms. Watch all the fun go down in the video above.

In other news, Travis Scott is getting heat from Colin Kaepernick’s team regarding a conversation that allegedly took place in relation to his Super Bowl performance. Get all the details right here.