The Italian techwear wizards at C.P. Company have once again partnered with Irish rapper and songwriter Reijjie Snow on a new campaign for Fall/Winter 2019, and they’re dropping a limited-edition T-shirt capsule to celebrate the partnership.

Combining his passion for graffiti and art, Snow uses the collection to reinterpret what he thinks C.P. Company could look like in the year 2050. His futuristic vision is laid out in a series of 10 original artworks reproduced in a collection limited to just 1000 pieces.

“We’re proud to celebrate our two-season collaboration with Rejjie Snow with a limited edition of T-shirts featuring his artworks,” says Lorenzo Osti, president of C.P. Company. “Before being a C.P. Company ambassador, Rejjie was already an authentic fan of the brand and it came natural to extend our partnership with co-created products.”

The capsule, which will be sold online and in select shops throughout Europe, US and Asia, including Extra Butter in New York City, underscores Snow’s work for the brand’s upcoming FW’19 campaign titled Paris Mon Amour.

Paris Mon Amour is the latest chapter of Eyes on the City — C.P. Company’s cultural project that takes their legendary garments to some of the finest cities in the world and pays homage to the authenticity of its community through the perspective of its people. In Paris Mon Amour, Snow soaks in the streets of the French capital while recalling the deep connection he has with the city and how its influenced his relationship with art.

Modeled by BMX biker and NYC-native Donovan Howard in his Lower East Side stomping grounds, get an exclusive first look at the tees from the collection above. Retailing at $98 each, look for the C.P. Company x Rejjie Snow T-shirt capsule dropping September 18 in-store and online at cpcompany.com and extrabutterny.com. If you haven’t checked out Paris Mon Amour yet, you can watch it below. 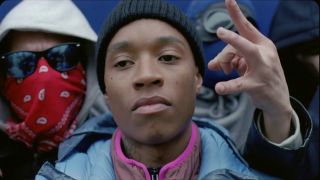 Style Hack: Swap Out Your Backpack for Some Pocket-Heavy Outerwear
SelectssponsoredFebruary 28, 2020

SHOP NOW: Every T-Shirt in the Tiosk by Highsnobiety Collection
StylesponsoredAugust 6, 2019