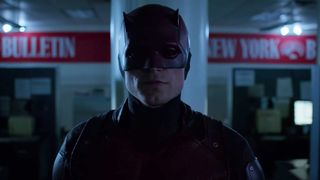 After last week’s teaser, Netflix has just released the official trailer for the upcoming third season of Daredevil.

The trailer highlights the return of Wilson Fisk, the Kingpin (Vincent D’Onofrio), who was put behind bars at the end of the first season. Matt Murdock (Charlie Cox) ponders his future as portraying both the vigilante Daredevil and lawyer Matthew Murdock, as he vows to put Fisk away for good this time, but Wilson Fisk is able to direct the law enforcement’s attention against him.

The visual portrays a doppelganger of Daredevil whom is confronted by the real crime-fighter Matt Murdock, and according to Gizmodo, Netflix confirms that the character Bullseye, one of Daredevil’s prime foes, will be appearing in the upcoming third season, and it’s suspected that Bullseye is the identity of the doppleganger in the trailer.

Up next, Netflix’s ‘Chilling Adventures of Sabrina’ gets a spooky new trailer.