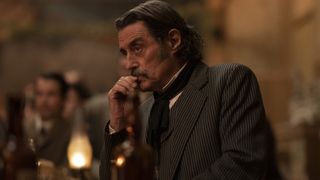 Following last month’s teaser, HBO shares the official trailer for the long-awaited Deadwood: The Movie. Nearly 13 years after the show’s cancelation, the majority of the cast returns as HBO proclaims, “Welcome the fuck back to Deadwood.”

Welcome the fuck back to Deadwood. pic.twitter.com/JJBzeeKfaz

Deadwood was cancelled following its third season, seemingly due to budgetary reasons. Now, David Milch’s Western gets the ending it deserves, again, over a decade later, after Milch teased the possibility of a movie shortly following the show’s removal from HBO.

You can look forward to Deadwood: The Movie premiering on HBO May 31.