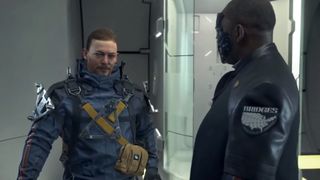 Since its announcement at E3 2016, fans have been itching to jump into the mysterious world of Hideo Kojima’s Death Stranding. After getting a first look at gameplay during this year’s Gamescom, we now get a whopping 48-minute long demo at Tokyo Game Show.

The lengthy play through dives into many aspects of the game, including cargo customization, the do’s and don’t’s of traversing the hills, rivers, and mountainous world, as well a closer look at a few monsters and companions you’ll come across as Sam Bridges.

We get to look at menu screens for picking up orders, fabricating equipment and stacking cargo on Bridges’ back, which includes adding massive amounts of storage compartments. We pulled a muscle just watching him stack containers on himself. Everything has a weight cost, however, so players will have to think carefully about what, and where, to equip before heading out.

While out on your adventures, Kojima shows off the large eerie world and how to navigate it. We get a closer look at the map, setting custom waypoints, and the many obstacles mother nature has put in our way. Whether it’s getting swept off your feet by waves in the river, or having to place expandable ladders to climb unreachable mountain tops, no journey is a simple walk in the park.

There’s also plenty of baddies you’ll come across. In the demo, we see Sam fight against a group in yellow suits and the mysterious shadow “BT” figure, which we’ve seen in multiple trailers. As a player, you’ll have to decide between fight or flight, given the scenario. Either stick it out and hopefully not die, or live another day but sacrifice some of your cargo for a quicker escape. The choice is all yours.

Watch the full 48-minute gameplay demo for Death Stranding above.