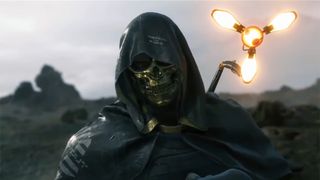 Donning a golden skull mask, Baker portrays a mysterious antagonist with the power to manipulate the ghouls that roam throughout the planet.

As it stands, Kojima Productions has yet to announce a release date for the game, which will be coming to PlayStation 4.

In other video game news, Sony is launching a mini version of the OG PlayStation.