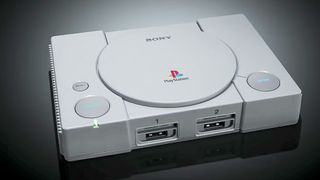 [UPDATE] October 29, 2018 10.15 a.m. EST: Sony has announced the full list of classic games that will come pre-loaded on the miniature PlayStation Classic. The console will feature 20 games games including Tekken 3, Final Fantasy VII, Grand Theft Auto and Metal Gear Solid. Scroll to see our updated story and the full list of games below.

A miniature version of OG PlayStation is on its way 24 years after the original console first hit the market, Sony has announced. Watch the promo video for the PlayStation Classic above.

The device looks practically identical to the original model, except it’s 45 percent smaller and boasts a bunch of contemporary upgrades such as HDMI and USB connections. Most importantly, it comes with 20 classic games preloaded.

The games will be playable in their original format, so retro gamers can get their nostalgic fill through 20 old-school favorites including Final Fantasy VII, Jumping Flash, Ridge Racer Type 4, Tekken 3, and Wild Arms.

The PlayStation Classic retails for $99.99 and will be available on December 3 — the same date the original console was released in Japan back in 1994. According to the official announcement, the device is already available for pre-order at select retailers across the US and Canada.

Will you be copping the mini PlayStation Classic? Let us know in the comments.

Everything We Know So Far About Sony’s PlayStation 5
LifestylesponsoredMay 22, 2019
Follow
Highsnobiety Design
What To Read Next
Load More
Search Results
Load More