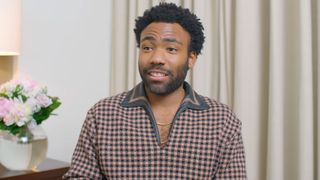 Aside from his internet-breaking video for “This Is America,” Donald Glover portrays as Lando Calrissian in the upcoming film, Solo: A Star Wars Story, slated to hit theaters on Friday, May 25.

To promote the film, the award-winning actor/musician took part in Noisey‘s segment, “Questionnaire of Life,” as he’s asked a variety of questions ranging different topics in a span of three minutes.

To kick it off, Glover was asked to pick between The Beatles, Elvis Presley and Migos, and Glover praised the Atanta trio saying, “Maybe it’s because, like, Migos is kind of a local band to me. They’re from my hometown and I heard them all the time.”

Glover then was asked to pick Kendrick Lamar’s finest work, choosing Damn., and saying, “All those albums are great, but Damn. is kind of an instant classic, right… I feel like with Damn. he condensed all of it into one cohesive thing.”

Glover also answered which Star Wars villain is better, (Darth Vader, Kylo Ren or Darth Maul), along with other subjects such as Biggie vs. Tupac vs. Jay Z, Prince vs. Michael Jackson vs. Justin Bieber, and more.

For more on Donald Glover, check out our exclusive interview with the star actor/musician/writer on ‘The Drip,’ Highsnobiety’s latest series taking a deep-dive look at celebrities and their jawnz.

11 Items That Will Keep You Balanced During Libra Season
LifesponsoredOctober 10, 2019

Chance the Rapper Reveals Donald Glover Got Him a Role in ‘The Lion King’
MoviessponsoredJuly 11, 2019

Here’s Who Our Fave Celebs Are Endorsing in the 2020 Presidential Elections
MusicsponsoredFebruary 4, 2020
Follow
Highsnobiety Music
What To Read Next
Load More
Search Results
Load More