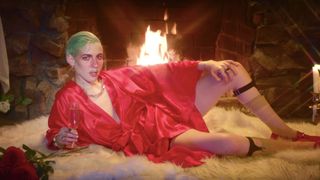 Rising pop star Dorian Electra has just dropped a new track called “Flamboyant,” and a suitably extra video to go with it.

The visual opens with thunder and rain outside a castle window, and moves to a sequin-clad Electra dramatically playing the piano as they read “Flamboyant” sheet music. It only gets more over-the-top from there, with Electra peacocking through a mansion surrounded by expensive things while clad in various outfits, including a red silk robe accompanied by a glass of champagne and sock suspenders; a plaid suit worn over a turtleneck and chain; and a white, frilly shirt and satin trousers, paired with a fur jacket.

Electra’s hair and makeup are also fittingly elaborate, with glitter playing a big part. The video clearly takes inspiration from famously foppish men such as Prince and Liberace.

As for the track itself, Electra sings lines such as “You know I like it loud, ‘cause that’s the only way, no taste for subtlety, and no time for restraint, I go all the way” over a futuristic beat with occasional tinkling piano and sudden electric guitar. Watch the video above.

Dorian Electra is dropping their debut album and embarking on a headlining tour later this year.

Dorian Electra on the Icons Who Inspired Their Warped World of Pop
MusicsponsoredNovember 26, 2019