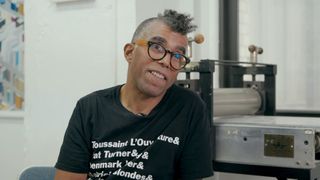 Dread Scott is an artist not afraid to push the boundaries of activism. With his work primarily focused on the experience of African Americans in the contemporary United States, Scott has become known by the masses (even POTUS) for his controversial interactive instillations.

“Black people aren’t chattel slaves anymore, but the basic social relations that existed in the founding of this country exists today,” Scott tell us. “I want people to think about that.”

He adds, “I make revolutionary art to propel history forward. I’m a visual artist and a professional trouble maker.”

Scott works in many different mediums, and has made countless of media headlines through his work including the ‘Signs of the Times instillation, which featured a street sign that read “Danger. Police in the Area” with an image of a cop shooting a person with their hands up. The piece is inspired by and sheds light on the ongoing police brutality towards black men in America.

Also, in response to the deaths of Alton Sterling and Philando Castile, Scott created an hung a flag at the Jack Shainman Gallery in Manhattan that read “A MAN WAS LYNCHED BY POLICE YESTERDAY”.

He’s currently working on a slave rebellion reenactment that will reinterpret Louisiana’s German Coast Uprising of 1811, the largest rebellion of enslaved people in America history.

Watch the full interview with Dread Scott above as dives into his creative process and motivations.

Ninja and Dele Alli Are Sports Stars of Today and the Future
EventssponsoredNovember 27, 2019