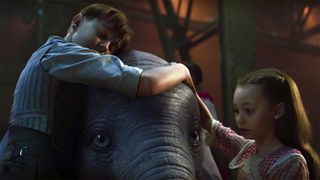 Disney has partnered with Tim Burton to retell one of its classic stories in Dumbo, as this week we get our first look at the anticipated 2019 live-action picture.

The film centers around a newborn elephant, Dumbo, whose oversized ears make him the butt of jokes at an already struggling circus owned by Max Medici (played by Danny DeVito). Former entertainer Holt Farrier (Colin Farrell) and his children Milly (Nico Parker) and Joe (Finley Hobbins) have been tasked to take care of Dumbo, as they quickly learn that the elephant can magically fly.

With Medici’s circus now on the comeback trail, rival owner of Dreamland, V.A. Vandevere (Michael Keaton), attempts to lure Dumbo to his newer, more impressive establishment. Dreamland, however, is not what it seems on the surface, as it is filled with deep, dark secrets.

Eva Green also stars as Dreamland aerial artist Colette Marchant in Dumbo, which is due in theaters March 2019.

For more movies, get introduced to a new Spider-Man in the upcoming ‘Spider-Man: Into the Spider-Verse.’

Watch the First Trailer for BTS’ ‘Bring the Soul: The Movie‘
MusicsponsoredJuly 6, 2019
What To Read Next
Load More
Search Results
Load More