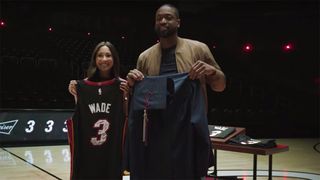 Tonight, Dwyane Wade will suit up for his final regular season home game with the Miami Heat, as the three-time NBA champion is expected to retire following his 16th year in the league. In lieu of his impending retirement, Wade has been swapping jerseys with various players during the 2018-2019 NBA season.

As many others have done throughout the year, Budweiser is paying tribute to Dwyane Wade with a heartfelt retirement video. The clip finds D-Wade face-to-face with some of his biggest fans, ones whom he has impacted off the court.

Instead of trading jerseys, his mother Jolinda Wade, the sister of Parkland victim Joaquin Oliver, Andrea Oliver, and more gift him with other items of significance, ranging from a collegiate cap and gown, to a blazer and a purple robe, representative of his impact on their lives. To see Dwyane reciprocating the appreciation, press play above.

Dwyane Wade on His 12-Year-Old Coming Out as Transgender: “You Are a Leader”
LifesponsoredFebruary 11, 2020

Rick Ross Is Cooking Up a Sneaker With Dwyane Wade
MusicsponsoredSeptember 25, 2019

How Kobe Bryant Made Me Up My Game
BasketballsponsoredJanuary 27, 2020