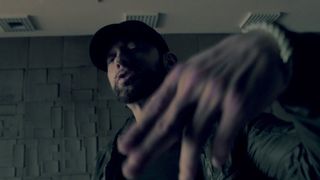 Just days ago Eminem delivered his surprise new album, Kamikaze, and now the veteran emcee is back with a visual in support of project cut, “Fall.” The song features assistance from Justin Vernon, who has since come out to speak on the controversy surrounding the tune.

Much like the message of “Fall,” the James Larese-directed aesthetic sees Eminem responding to his critics, specifically pertaining to his 2017 album, Revival. At the end of the piece, we then see a copy of the LP being smashed.

Following the release of Kamikaze, “Fall” collaborator Justin Vernon informed that he “was not in the studio for the Eminem track” and that he is “not a fan of the message.”

“It is certainly not the time for slurs. I was wrong and we are gonna kill this track,” he added.

You can revisit the album underneath.